Oxfordshire is at the centre of the area in which Cotswold Morris is danced. When asked to research the Morris in relation to our project, the first thing I realised was that hats and shoes are not necessarily the essential parts of the Morris costume: a Morris dancer is not a Morris dancer without bells, and other items such as handkerchiefs (‘wavers’), sticks, ribbons and flowers (or bladder and tail for the Fool) are usually part of the kit. Of course, shoes are indispensable, but in fact they tend to be the most uniform element of the kit across the various sides, between which difference is otherwise celebrated: they are usually black, and fairly lightweight to allow a graceful step. Many sides dance hatless, and headwear is rarely mentioned in the literature. 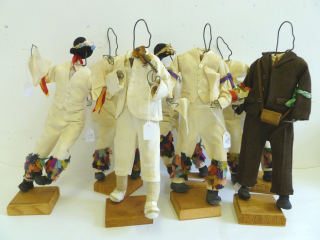 Dolls representing the Bampton side (date unknown), including a musician figure with tiny fiddle, probably supposed to be William ‘Jinky’ Wells!! Alice, the Society Archivist at Cecil Sharp House, dug these out for me when I visited. Photograph courtesy of the English Folk Dance and Song Society.

However, as I began to discover, tracing the stories of these somewhat peripheral items of costume allows a history of the Morris in Oxfordshire and a handful of remarkable characters to emerge. Shoes, actually, contributed to the decline of Morris dancing in the 1800s: Morris dancers were low-waged labourers who danced to supplement their income; following economic hardship in the first half of the nineteenth century, audiences no longer gave much money and “it got like begging”, as one old Morris dancer recalled. The dancers could no longer afford to buy shoes that they danced through regularly, since they “weren’t ‘patternised’ enough”.

Hats, lasting longer, tell a multitude of stories. Sides adopted styles of headwear largely based on availability: a type that each man had access to. At Eynsham during the 1930s the men wore ANZAC hats; at Headington Quarry cricket caps have been continuously worn. During the revivals (around the turn of the nineteenth century and again in the late twentieth century) top hats, in particular, suggested ‘tradition’. The revived Eynsham side of the 1980s chose top hats stuck with pheasant feathers in tribute to a famous forebear, Edward ’Feathers’ Russell. 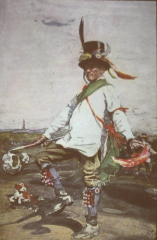 Feathers Russell of Eynsham painted by William Nicholson in around 1901 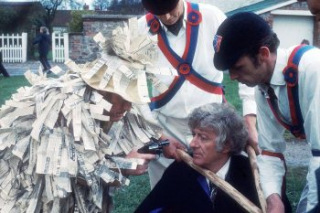 Once a basic uniformity is established, however, hats are often altered and decorated, displaying individuality. Hats, like other garments, are worn in and worn out, handed down, adapted. Joe Marns’ hat, at the Vale and Downland Museum, is an autobiographical, battle-worn object covered with mementoes and insignia. Being particularly customisable, hats are adorned with flowers at Whitsun, studded with badges marking festivals danced at or affiliations to clubs or political views, bedecked with ribbons, pimped up with diamante, and, regularly, soused in beer from an upturned glass. 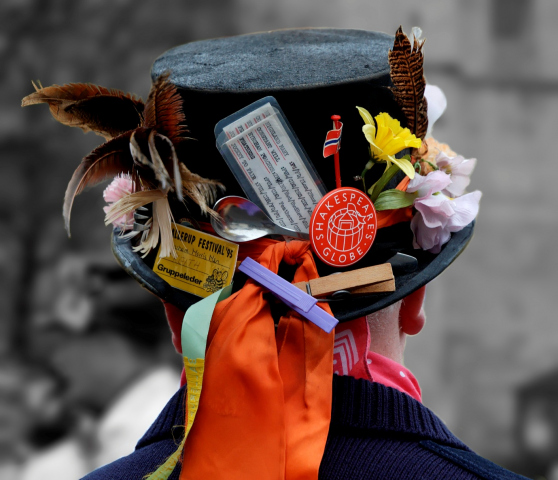 Eynsham Morris dancer, photographed by Suzy Prior. Image © Suzy Prior.

I have worked in the Department of Eastern Art at the Ashmolean for over 5 years and I am very excited about being given the opportunity to work with museums across the county on this project. As Collections Access Officer I will research headwear and footwear in museums and collections in the whole of Oxfordshire, curate an exhibition at The Oxfordshire Museum and work with Education teams and community groups to create an exhibition at the Museum of Oxford.
View all posts by Aimée Payton →
This entry was posted in Uncategorized. Bookmark the permalink.