We are nearing the end of the Ashmolean Latin Inscriptions project and were looking for an audience we hadn’t yet worked with. We noticed that there is very little opportunity for adults with learning disabilities to explore Latin inscriptions. So…

END_OF_DOCUMENT_TOKEN_TO_BE_REPLACED

What does it feel like to hold a Roman sling bullet? What can we learn about the Romans from a little lump of terracotta? How can cartoons bring ancient Rome to life? What was a Roman funeral really like?…

END_OF_DOCUMENT_TOKEN_TO_BE_REPLACED 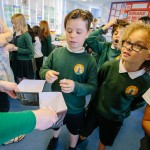 We’ve been touring primary schools in Oxford this term to try out some new activities.   Children got the chance to pick a Roman name. They used their new Roman identities to make clay inscriptions, choose Roman jobs and make…

END_OF_DOCUMENT_TOKEN_TO_BE_REPLACED

We announce some changes in the project team and look forward to our next challenges. Dr Abigail Baker has joined the team as a Research Fellow. She will be running education and outreach activities and working on completing the web catalogue.…