‘When Agrippina reviled him [the emperor Tiberius], he had her flogged by a centurion, causing her to lose an eye. When she resolved to starve herself to death, he had her forcibly fed, and when through pure determination she succeeded…

END_OF_DOCUMENT_TOKEN_TO_BE_REPLACED 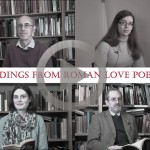 As the feast of Saint Valentinus (a Roman, no less) is upon us, we’ve been thinking about love letters, or rather the different kinds of texts written by Romans about the people they loved. We know about the fiery passions…

END_OF_DOCUMENT_TOKEN_TO_BE_REPLACED

It’s the year AD 2015. Happy New Year everyone! For those of us who’ve grown up describing years as BC and AD, it can be hard to imagine doing it any other way. But describing a date as Before Christ…

END_OF_DOCUMENT_TOKEN_TO_BE_REPLACED How Roman Britons kept on the good side of a bad emperor In 1672, a Roman altar was found on the south bank of the River Tyne at South Shields. Measuring over a meter in height, it had images of…