Every intelligent person that I have met whose good fairy has led him to the Celestial Empire has fallen under the spell of that marvellous people and marvellous land. I am fired with the ambition to cast that spell even on those who have never been there, by showing them as accurately and vividly as can, with pen and brush, what the face of China actually is.

The Kemp Collection is one of the most extraordinary archives in the Eastern Art Department at the Ashmolean. It was created neither by an Eastern artist nor in an Eastern style. It even has a longer history than the Eastern Art Department. Offered by the British female explorer Emily Georgiana Kemp (1860-1939) in 1938, collections of watercolour paintings made by the artist herself, together with other objects illustrating Chinese life and art, were bequeathed to the Indian Institute, which is the precursor of the Eastern Art Department. This collection arrived during the re-organisation of the Museum of Asian Art and the artistic and historical value of the bequest fits perfectly with the purpose of limiting the display to objects of real artistic or historical importance. “(Kemp’s bequest) would enhance the educational value of our Museum,” The registrar of the University stressed in the letter, “and they would wish to help the university … obtain a collection of good enough quality to form the nucleus of a Chinese collection.” Apart from the quality and subject of the collections, the artist’s beliefs and achievement enhanced the paintings to something more than a snapshot of a scene. After graduating as one of the first students of Somerville College, Oxford, Kemp started to travel around and developed a lifelong passion for East and Central Asia. As an artist, writer and explorer, Kemp published six books that covered all her well-known journeys and expressed her extensive vision about religions. She was awarded the Grande Médaille de Vermeil by the French Geographical Society because of her work in 1921, Chinese Mettle, which was an honour never granted to a woman before. In 1935, Kemp founded the Chapel of the Somerville College to provide a place where members of all religions could pray. Along with her own work, the Lancashire-born adventurer had also bequeathed a number of artworks from other artists, such as Alphonse Legros (1837-1911)’s etchings and drawings, which filled a gap in the museum collection, and are currently housed in the Western Art Department.

The archive includes over a hundred published and unpublished watercolour sketches, 19 photographs, 10 textile pieces and more than 200 lantern slides. China was one of the most mentioned areas among Kemp’s works since her younger sister and brother-in-law were  missionaries in China. She visited China several times during late nineteenth to early twentieth century. While visiting the British missionaries based in China, Kemp travelled through thirteen provinces (including Beijing, Hunan, Sichuan, Yunnan, and Shanghai). The slow passage along road and rivers allowed Kemp time to write, paint and watch China slip slowly by.  As a meticulous observer, she captured everything that caught her eye: the architecture, the landscape, or a glance of local daily life. Most of the watercolours and sketches that illustrated in her books are stored in Eastern Art archives, along with many unpublished ones. All of the artworks in the collection are in very good condition and are still as vivid as when they were made. 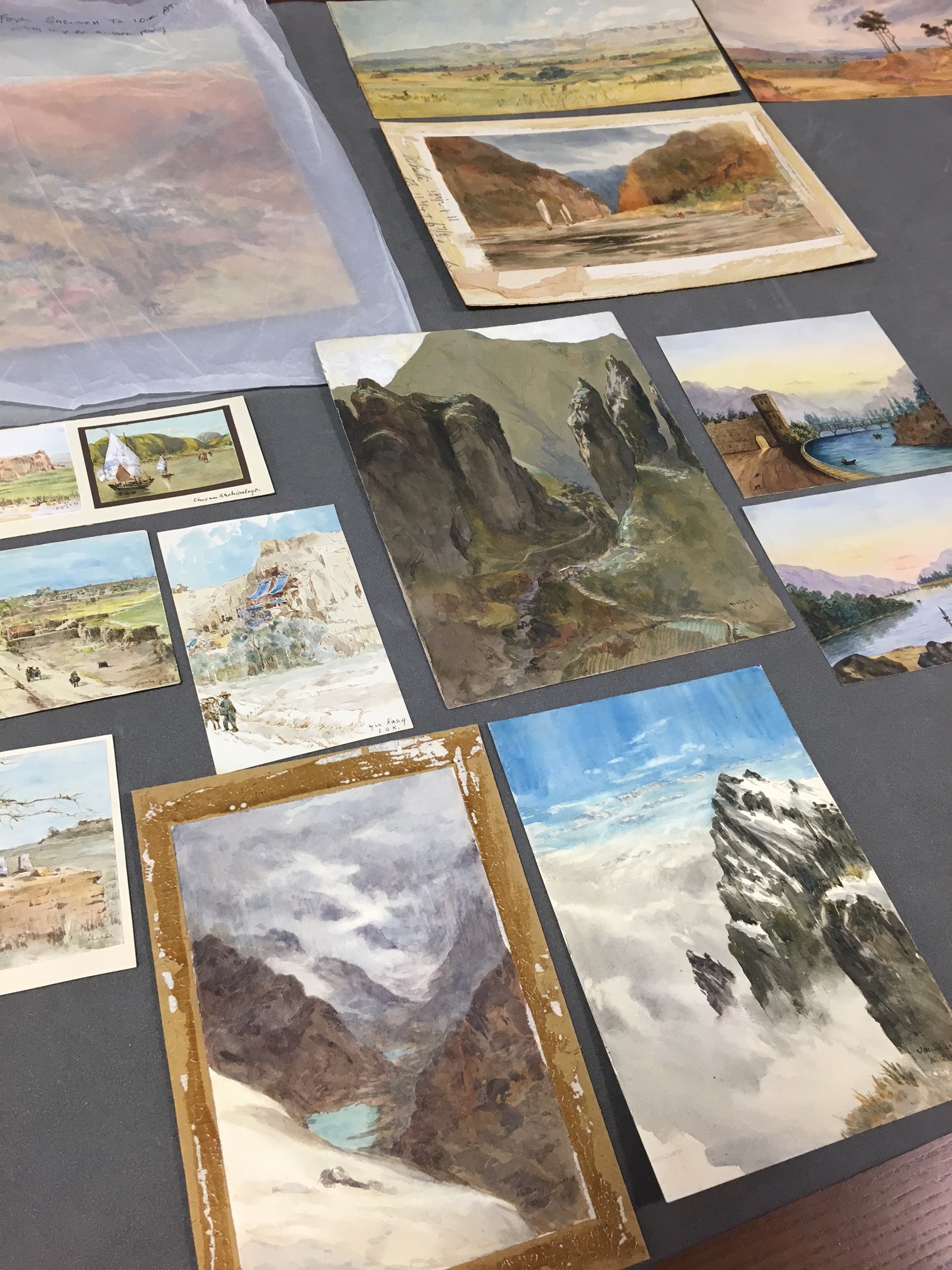 Kemp resided for a year in Taiyuan (capital of Shanxi province) with her missionary family members. She was deeply interested in the various local religions and the ways of practising them in a different yet harmonious manner, largely due to the fact that Shanxi has a long and prosperous history of Buddhism and Taoism. “The subject, however, was so charming that I could not waste the one chance I had of sketching.” Kemp described. She visited several monasteries and captured the beauty of the architecture from every angle. Most of the scenes still exist today. Omi tofu, Drawing, Emily Kemp Archive
“We were interested to meet quite a new god in this region. He has three faces, and wears a large stone hat. He is carved in stone and stands by the roadside like a little milestone at intervals all along the way but frequently there are no signs of worship about him. He is called by the Buddhist formula “O mi to fu”, and is worshipped by labours to prevent their getting sore feet, so they frequently burn sandals before him, and incense sticks may be seen in front of his image” -Kemp, E. (1909). The Face of China © Ashmolean Museum, University of Oxford

Kemp made a remarkable group of watercolours of the faces she met during her trip. Instead of systematically studying local ways of dressing, Kemp’s work is more impressive as a commentary on the physique and behaviour of various local characters. During her time residing in China (although short), Kemp was able to make use of her and her sister’s insider knowledge to represent China from different angles. Kemp’s writing shows more freedom and diversity than the missionary writing, which was tied to a particular mission. From the westernised noble court official to the young illiterate labourer, Kemp’s pen and brush depicted a country in transformation through its people. The ardour toward people from different backgrounds was presented in her artworks with equivalent attention to detail, which she believed to represent their style of life, or, what’s more, their state of mind.  Kemp’s friendly approach towards local people always won her a delighted response. “Often the women came round and smilingly interrogated us. Then we went through an amusing dumb conversation of the most friendly sort. The subject is usually the same – feet- and they never fail to admire our English boots, if not our feet. We, on our side, express much admiration of the exquisite embroidery of their shoes, though we do not admire their feet.” All of these elements produced a unique and accurate depiction of the local culture. 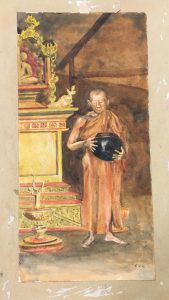 Wutaishan Abbot, Watercolour, Emily Kemp Archive “The Abbot sat down and began discussing our respective religions, which he said were exactly the same. While agreeing as to their fundamental principle being the same, I felt unable to discuss their differences, being somewhat inattentive, I fear, owing to my endeavor to get on with the sketch as rapidly as possible.” -Kemp, E. (1909). The Face of China
© Ashmolean Museum, University of Oxford 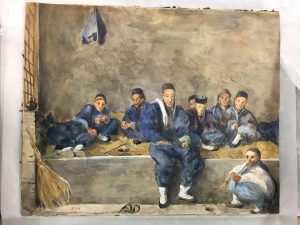 The Opium Refugee, Watercolour, Emily Kemp Archive, “Under the Governor’s active steps of put down opium cultivation, a group of patients come to a mission refuge to try to break off the habit. They are resting or sleeping on Khang(the brick bed). ” – Kemp, E. (1909). The Face of China © Ashmolean Museum, University of Oxford Mr. Ku, Watercolour, Emily Kemp Archive, Mr Ku was a young member from an official family. He was educated at St. John’s College, Shanghai and acted as Kemp’s interpreter for five months. Kemp described him as a “Scholar of gentle and amiable manners, honourable and guileless.” -Kemp, E. (1909). The Face of China
© Ashmolean Museum, University of Oxford 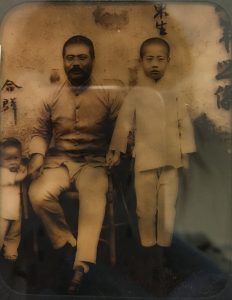 General Feng Yuxiang and his son, Slide, Emily Kemp Archive, Original photograph was a gift to Kemp after an interview with General Feng.
© Ashmolean Museum, University of Oxford 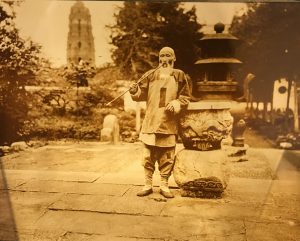 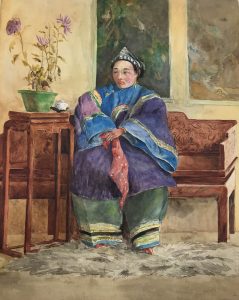 An Official’s wife Watercolour, Emily Kemp Archive. After a visit to an accommodating, easy-going lady of quality (Concubinage), Kemp was sent a “fascinating assortment of Chinese paints, each done up separately in the neatest little parcel, containing either a bottle or a little box”
© Ashmolean Museum, University of Oxford


Kemp also visited Miao tribes in Guizhou, which were rarely explored by tourists at that time. The Miao lived in a village which was located in the deep valleys of the province, and was described by Kemp as “Almost inaccessible to the outside world and are only penetrated by missionaries”. Kemp used a chapter to describe the Miao in her book Chinese Mettle, which generally covers the different Miao tribes living around the province and their embroideries, languages and religions.  Apart from watercolours and photos, the Kemp Archive also houses a pair of Miao sandals. Hua Miao, Photograpy, Emily Kemp Archive,
“The Wha Miao (Hua Miao, flowery Miao) are so called because of the colour of their dress, which is dyed blue and red by an ingenious method of stenciling the cloth, using beeswax to make the design….The women, when married, wear their hair erected into a horn, which sticks out from the side of the head; but as soon as they have children the horn is erected straight up from the top.” -Kemp, E. (1921). Chinese Mettle
© Ashmolean Museum, University of Oxford

Kemp also spared no effort to speak highly of the spread of women’s education and welfare in China under the influence of English missionaries. She celebrated the policies issued by warlord Yan Xishan, the governor of Shanxi Provice, who encouraged girls to enrol into colleges. The Kemp collection includes some very precious photos and a sketch of the opening of the Edward’s Memorial Institute at Taiyuan (EMIT), which was to commemorate the work of Kemp’s sister, Edwards’s wife S. Florence Edwards (Known as ‘living Buddha’ to the local for her generous, loving personality).  The Institute housed about 200 students, including governor Yan Xishan’s wives. Kemp was also a friend of Zeng Baosun (曾寶蓀), a Chinese pioneer feminist, historian and Christian educator, and was invited to visit the first Christian University for women in China founded by her, the I-Fang Girls’ Collegiate School. Zeng Baosun,
Slide, Emily Kemp Archive
Zeng Baosun (曾寶蓀), the great-granddaughter of Zeng Guofan. After received teaching training at Oxford and Cambridge, Zeng returned to China and founded I-Fang Girls’ Collegiate School in 1918, Changsha (Hunan), where anti-Christian and anti-foreign riots erupted constantly during the late 1980’s. Zeng’s work was very highly regarded by Kemp: “When I reflect on the state of unrest which existed during the birth of this school and the masterly way in which Miss Tseng(Zeng) has overcome all the difficulties of the situation, I find no words adequate to express my admiration. ”
-Kemp, E. (1921). Chinese Mettle
© Ashmolean Museum, University of Oxford

The Kemp Collection is a varied collection which provides remarkable resources for different subjects. Her involvement and awareness of the culture and people allowed for a new complex image of China to emerge. All items in the collection are available in The Jameel Centre for the Study of Eastern Art for viewings by appointment. Click HERE from more information.

Kaiser, A. T. (2016). The Rushing on of the Purposes of God: Christian Missions in Shanxi since 1876. Wipf and Stock Publishers.

Yi Wu is an archive assistant and a local history student with a background in paper conservation. She currently volunteers for the Eastern Art Department, Ashmolean Museum and works at the Bodleian K B Chen China Centre Library.