Qu Leilei: A Chinese Artist in Britain at the Ashmolean

Qu Leilei: A Chinese Artist in Britain is a retrospective of the contemporary artist Qu Leilei on display at the Ashmolean Museum in Oxford until the 15th of April 2018. The exhibition curated by the former Christensen Fellow in Chinese Painting Dr Yan Liu includes works from the early 1980s up to recent works from 2016 demonstrating different artistic techniques such as calligraphic collage or an exploration of new ink language blending lively brushwork with western technique.

Stunning greater than life-size ink paintings of female nudes and hands are one of the highlights of the show demonstrating Qu Leilei’s mastering of traditional Western subjects and Chinese media. Several nude studies and sketchbooks from the last 30 years reveal his in-depth research of human anatomy. Other elements are more closely linked to Chinese history and culture such as philosophical inscriptions quoted on his collage works, or his ink paintings from the series A Thousand Years of Empire, started in 2011. Ink and watercolour drawings depicting motifs from his travels in Britain and abroad complete the exhibition and allow viewers to appreciate different facets of Leilei’s artistic production. Qu Leilei was born in 1951 in Northeast of China into an intellectual family; his father Qu Bo (1923–2002) was a famous writer. From an early age he was trained in Chinese calligraphy and traditional painting by friends of the family. During the Cultural Revolution Leilei painted propaganda material and worked as a barefoot doctor in the countryside. In the 1970s he moved to Beijing where he became a founding member of the Avant-Garde Group Stars and participated in their first show in 1989. 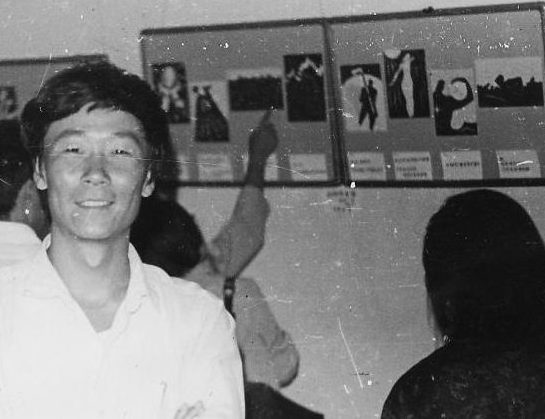 Above: Qu Leilei at the second Stars exhibition in Beijing 1980 © the artist. Right: Fate control, sketchbook 1983, ink and colour on paper, collection of the artist © the artist 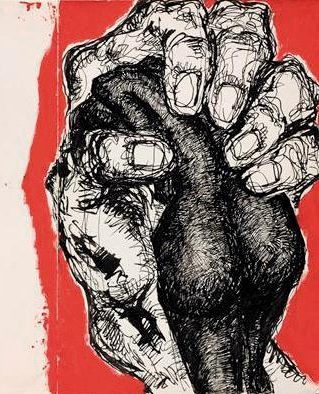 In the mid-1980s Leilei took the difficult decision to leave his home country to seek a life with more freedom in the UK. In London he studied at the Central College of Art under Cecil Collins (1908 – 1989), a painter of visionary subjects and in the early 1990s, met his wife Caroline Dean, a British painter. His art works from the late 1980s and 1990s are imbued with self-questioning about the future and with negotiating Chinese and British cultural influences.

In 2005, the Ashmolean displayed a series from his work cycle Everyone’s Life is an Epic showing portraits of people from different backgrounds ranging from close friends to complete strangers. The Ashmolean collection holds several portraits by the artist including those of the art historian Michael Sullivan (1916-2013) and of his wife Khoan (1919-2003). The artist and the pioneering Chinese art researcher were longstanding friends as illustrated in the painting Friendship from 2012, depicting Michael Sullivan holding Leilei’s wife’s hands. It is a great honour that Qu Leilei has decided to present the work along with others paintings included in the current exhibition to the Ashmolean. In March 2018 Qu Leilei demonstrated his collage and paintings techniques at the Museum. His collages on display, such as The Creator of Civilization from 1994, distinguish themselves through the insertion of self-written poems or philosophical texts and the seamless transition between the different layers of papers. The flatness he achieves by using traditional Chinese mounting techniques clearly differentiates his collages from early 20th century European explorations with the medium by artists such as George Braque or Pablo Picasso. In order to better understand the technique and material Qu Leilei uses, he gave a full step by step demonstration of his collage mounting process. Qu Leilei’s first step in the process is the selection of the paper and the creation of smaller pieces to reassemble. Leilei usually uses xuan or maobian paper which he colours or inscribes before tearing it into pieces. He then lays out the pieces of paper and adjusts them until he has achieved a visually satisfying new composition which he makes sure to document with a photo. Next, he damps each of the pieces of paper lightly with water before arranging them upside down in mirrored order on a waterproof surface.

Using a soft-bristled hand brush Leilei then applies the gluten free flour paste on the back of the paper which he has prepared beforehand. With expert hand movements Leilei ensures that the flour paste is evenly spread before he aligns the backing paper on top of the smaller pieces. He usually uses two layers of the quite strong mulberry bark paper to ensure it does not break when still wet. With a stiff-bristled hand brush he presses the pieces of the collage work against the backing paper trying as much as possible to avoid air bubbles and creases. Then he applies another layer of flour paste around the edges of the paper without covering the back of the image allowing to stretch the painting well. The finished collage left on a board to dry. © the artist

He then gently lifts the work away from the surface using the help of a knife and places it on a vertically propped board. One last time Leilei brushes the edges to ensure the paste is fixed, making sure to blow a bit of air before closing the final corner ensuring that the actual collage will not stick to the board. The collage is then left on the board to stretch and dry for several days before it will be cut away. Qu Leilei’s techniques are based on mastering traditional techniques and on constant practice as he proved through demonstrating different types of calligraphic scripts and a colourful flower painting at the Ashmolean.  His ink nude paintings however require a different additional skillset as he uses subtle shadow and light effects to slowly sculpt real-life looking bodies. The thin paper does not allow for any mistakes and he has to carefully layer each colour patiently waiting for it to dry to be able to continue. As he states: “When rendering with shadows one after the other, it requires more confident and skilful brush handling, as rice paper is very fragile and prone to tearing after multiple ink washes. To produce a good painting, we need to balance the relationship between simplicity and complexity, light and shadow, void and substance, softness and hardness.”[1] Achieving the right balance is key to Qu Leilei’s craftsmanship together with his curiosity pushing him to keep on exploring new subjects.