“Among all the angels and demons, there is one figure that incontestably merits particular attention”. Such were the words of the Paris Salon when they encountered Feuchère’s striking rendition of hell’s ruler. Encapsulated within his wings, his chin placed thoughtfully upon his hand, Satan comes across as a rather lonely figure. His brow lies furrowed as he gazes at nothing in particular. Feuchère demonstrates a certain empathy towards the devil’s predicament. He is at once both brooding and wistful; infernal but oddly relatable. As such Feuchère depicts the essentially human identity of Satan: a flawed, emotional being designated as the Adversary but doomed never to actually prevail.

Depicted as ponderous, and perhaps even melancholy, the most immediate feature of the piece is its intriguing resemblance to Auguste Rodin’s celebrated sculpture the Thinker. However, Rodin’s first conception of The Thinker was not until 1880, 46 years after Feuchère’s piece was exhibited at the Paris Salon in 1834. It is therefore considered a precursor, and casts a refreshing context over The Thinker, a statue so prominent in popular culture. The resemblance was highlighted in the 1980 exhibition The Romantics to Rodin: French Nineteenth-Century Sculpture from North American Collections in 1980, which used Feuchère as the cover illustration and Rodin’s Thinker upon the back. 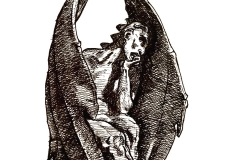 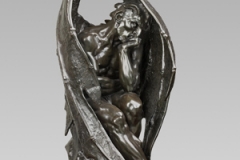 Drawing by Freddie Davies on the left, on the right, the bronze of Satan/Mephistopheles, by Jean-Jacques Feuchère

The sculpture also bears the name Mephistopheles, who was originally a demon in German folklore. He is the demon who accepts the wager of Faust’s soul in return for an abundance of knowledge and power. Evidently the harvest of souls is not as fulfilling as it could be, and the sculpture renders him as dissatisfied with his lot as Faust himself. Once again this identifies him as a rather human character, particularly with this notion of longing and unfulfillment. Mark Antokolsky, the Russian sculptor, rendered his own interpretation of Mephistopheles in 1884, in a similar seated, pensive position, but without the demonic wings, horns and spines. Starkly different to Feuchère’s dark, rich bronze, Antokolsky utilizes a pure white marble in a kind of neoclassical style, immediately likening the demon to the famously Greek pantheon of gods. Satan, always a hit with the crowds, was a popular theme for the imagination of artists in the 19th century, influenced by the common inspirations of Goethe and Dante. Perhaps the romantics were smitten with sympathy for the demon and his association with the pitfalls of passion and emotion, rather than the tiresome virtues of reason asserted by the Enlightenment.

Lord Jeffrey Archer donated the piece – 80cm high – in 2016, in a move to reduce his tax bill by the hefty sum of approximately £48,000. Perhaps Satan broods at the realisation that he is no longer revered and dreaded as the king of hell, but has become no more than a welcome tax break for the English aristocracy.

Find this sculpture in the newly refurbished Gallery 65. More information on the object http://www.ashmolean.org/news/acquisitions/index.php?id=381

This entry was posted in Uncategorized and tagged Art, Drawing, Gallery 65, Object. Bookmark the permalink.