Walking into the print room in the Ashmolean I was first struck by the room itself – the friendly, musty smell from the old books lining the walls; drawers enticingly entitled ‘Turner’ or ‘Ruskin’; the small semicircle of chairs sitting in front of a table. Our group of twelve were here leaning in around a table as part of an afternoon of exclusive viewings of the drawings of Raphael, led by Western Art curator Dr Angelamaria Aceto and the Ashmolean Student Creative Board. Raphael is best known as an exemplar of Renaissance innovation, famous for his images of the Madonna and his compositions in the Vatican. Often, the focus is on his paintings, with the vast array of drawings he produced being seen as a tributary of his artistic efforts, a teaching tool for his students, or most commonly as preparatory sketches existing only to be replicated in oils. Angelamaria’s emphasis however, and a key motivation for a forthcoming exhibition in the Ashmolean this summer, is to resituate these drawings and consider them as revelatory works of art in their own right.

The drawings housed by the Ashmolean ranked among the first acquisitions of the museum and form a cornerstone of its collections. The physical pieces of paper, lying on the table encased in protective layers, are striking as objects in themselves: seemingly delicate, yet having endured the weight of 500 years of history. Indeed, the first two sketches brought out by Angelamaria – studies of drapery – were, uniquely, unmounted – a state they are unlikely to be in again for some decades and one which only emphasised their fragility. Viewing these drawings as single sheets, away from the grandeur of a frame, provokes a more intimate relationship with them: Raphael’s mixed media use is foregrounded, his hand and pen lines are clear, a few quick yet confident strokes shape the falling of light upon the cloth. It is all too easy to picture these sheets propped in Raphael’s workroom. 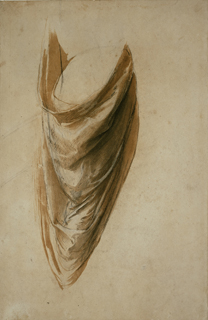 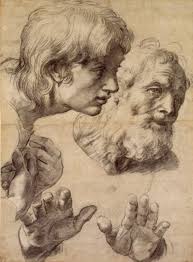 Drawing of two apostles by Raphael


The materiality of these works is also illuminating considering Raphael’s use of the paper. With a small torch, Angelamaria shows us the almost invisible grooves that lie underneath the pen or chalk etchings, nearly imperceptible guide lines that inform the works above them. In one particularly striking drawing, Raphael uses paper which previously had been marked by a compass: turning the sheet over, he utilises the faint lines and centre of the compass mark to form the central focal point and leading lines for a composition of the Resurrection. On one level, this shows Raphael as a workman and pragmatist, reusing leaves from his workshop; on another, it presents his mind as constantly working, stuck by snap inspiration to create art in dialogue with the materials he had already. In one of my favourite works, the group of us gasped as Angelamaria turned a drawing over to reveal not only further sketches of angels on the back, but also lines of Petrarchan poetry, quickly crossed through and reworked at points. Raphael’s pen shows through both his sketching and writing the connection between hand and mind, clearly portraying motion, restlessness, and intense bursts of fluid creativity.

The best was saved for last. In a realisation of a cliché I have always wanted to use, the room was silenced with awe as the final drawing was presented: a detailed study of figures who would later feature in ‘The Transfiguration’. The drawing is finished and precise, with Raphael’s technical skill shining through from the fine crosshatching to the depth of the image. Angelamaria drew our attention to Raphael’s reworking of the hands of one of the figures in order to add emotion to the gesture. This comprises a prime example of what she deems Raphael’s ‘eloquence’ – his ability to tell a story through just a few strokes. This sketch is also one of the most striking we saw because it actually surpasses the painting it was produced as a precursor to in terms of aesthetics. It has been conjectured that as ‘The Transfiguration’ was left incomplete at Raphel’s death, it may have been finished by one of his students and therefore does not display the same detail or intensity – but nonetheless, the emotional and technical dimension of the drawing in its own right shows clearly to me that these sketches were intended for more than practice.

The eye for emotion, detail, and aesthetics encapsulated in these drawings make me firmly side with Angelamaria and others who consider these works as complete, deliberate works of art rather than secondary to Raphael’s other achievements. More than simply preparatory works, then, these drawings are emblematic of Raphael’s mind, his confident technique indicating a corresponding directness of vision. It was a real privilege to have explored these drawings so intimately for an afternoon.

To view Drawings by Raphael and other artists, please contact the Western Art Print Room: waprintroom@ashmus.ox.ac.uk

This entry was posted in Art, Uncategorized and tagged Raphael. Bookmark the permalink.