Oxfordshire is at the centre of the area in which Cotswold Morris is danced. When asked to research the Morris in relation to our project, the first thing I realised was that hats and shoes are not necessarily the essential … Continue reading → 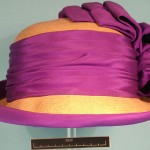 A few weeks ago the improvements to the documentation of hats at the Museums Resource Centre began.  Twenty Five hats were moved into the textile store photographed from specific angles and measured.  All information has now been added to the modes … Continue reading →

More Galleries | Comments Off on Documenting Hats at the Museums Resource Centre.

A surprise at Thame

A surprise awaited Sam and I at Thame Museum last week.  We had received a list of about 25 relevant objects some time ago.  There were a couple of things that had caught our eye, particularly an Elizabethan shoe, a … Continue reading →

More Galleries | Comments Off on A surprise at Thame

Shoes Wonderful Shoes Aimee and I spent the other day at the Museums Resource Centre looking at our shoe collection.  We discovered a massive hoard of parts of leather shoes found in a ditch at the Oxford Castle, a great … Continue reading →

Jess found out some interesting facts about Cardinal Wolsey’s hat, which is in the library
at Christ Church College.  The provenance of the object can be traced right back to 1710 when it was discovered in the Great Wardrobe, which housed the clothing of the royal family.  For some reason it was thought to have belonged to Wolsey but the justification for this has been lost.  Wolsey died in 1530 and in those 180 years anything could have happened to his garments.  And this particular hat could have belonged to one of many Cardinals, I’m sure.  However, his name has been attributed to this object and it now carries a mysterious aura.  It is no longer a felt hat in the style that Cardinals wore which is called a Galero.  It has become a part of Wolsey and his story, proudly displayed by Christ Church for all to marvel at it.

This often happens with museum objects.  A name becomes attached to something and it takes on a whole other level of meaning, even if the association is debatable.  These are the objects that you are likely to remember and tell people about after your visit.  And so their
ability to captivate is perpetuated.  I would love to find more hats and shoes like this.  A case full of personal objects belonging to the great and the good would be wonderful.
Imagine their collective power!

Posted in Uncategorized | Comments Off on Fame and hats

It has been a week of meetings.  Don’t worry this blog post won’t read like minutes.  There are a few things that might interest you.  In fact one of the meetings was actually very exciting!  Jess and I met with Education staff Helen and Neil from the Museum of Oxford and Susan from the University Museum Education Service.  We bounced around lots of ideas for the Community Exhibition, which will be in March at the Museum of Oxford.  To be honest, when I started this project I wasn’t sure what this “panel based Community Exhibition” was all about.   But I am now convinced that this will be really fun.  I’m not going to give too much away at this stage as some of these ideas might fall by the wayside.  So watch this space!  But I do have my fingers firmly crossed that I might be able to live out my childhood dream of going into the costume shop that Mr Benn loved so much.  (See my post from last week!)

Something else that has got me thinking was an article I read in “Shoes: A History from Sandals to Sneakers” which was about military footwear.  What struck me was the
contrast between the wonderfully flamboyant hats which I had seen at the Soldiers of Oxfordshire Museum and the woefully inadequate boots that soldiers were issued with right up until the First World War.  Of course their superiors had beautifully crafted, handmade boots, which matched their dapper headwear but neglecting to provide sufficient boots left the army weak and many battles lost.  Can you imagine how useless and unshod army would be?  By some accounts the boots were so badly made that they fell apart after one day of marching.  Some sham mass production techniques used clay in the soles to add weight and therefore the illusion of quality.  These boots also fell apart at the first contact with water.   And despite huge improvements in production by the beginning of the C20th, we’ve all heard of trench foot suffered by soldiers during the First World War.  That’s all rather gruesome to imagine.

If you want to read more the book’s full details are below.  I have been referring to this book a lot through my research as all the essays are fantastic.  Well worth a look.

Posted in Uncategorized | Comments Off on The Exciting Meeting!

Inspired by the theme of this project Penny Boxall wrote this wonderful poem.  I hope we hear more from her through the course of the project.

Unpacking my Grandfather by Penny Boxall

The jackets – all but his best – the slacks
and braces were displaced, one way
and another. The shirts were immaterial.

We used the old shot tweed
for lagging, a waxed coat for a play –
it stood for something we could name,

a useful byword anyone could catch.
The semaphore of his ties was sunk
with him, though the waders stand

absurdly upright, jammed with husks,
animals hedging their bets at the first frost.
The brogues are under a fence of coats, paired

in two ready steps. Above them
his hat hangs like an afterthought,
as if he’s wandered through the open

doors into the half-lit film of evening
and will be back for it, given time.
It’s shaped to him, stained with a forgotten

weight of rain and curdled smoke.
Of all his things this is the last,
when even the shoes have broken

their step, upped and left. Even on
the hook it is firm, it is full to the brim.

Posted in Uncategorized | Comments Off on Poetic hats and shoes

Sam and I had a jolly morning at the Didcot Railway Museum looking at hats.  There was surprisingly quite a range; different shaped peaks, soft crowns, hard crowns, various embroidery techniques and colours but each hat unmistakeably belonged to a First Great
Western employee.  Trains induce a mysterious fascination particularly for small boys, some of whom never grow out of it!  In fact the Didcot Railway Museum was founded by four, not so small, 16 year old boys in the 60s.

I’m sure that the excitement of being in control of a huge, powerful engine hurtling through the countryside is something that all enthusiasts dream of, young and old.   And the mark of the driver is of course the hat.  I wonder how many scaled down,
train driver’s dressing up costumes there are.  In the Witney and District Museum there is a child’s bus conductor’s uniform complete with hat. Not quite the same fan base but I think our next visit might have to be to see this.  This all reminds me of my favourite programme when I was a child which I was excited to find out was one of Sam’s favourites too.  What I am about to share with you will date Sam and I to a particular decade!  Do you remember this?  “And as if by magic, the shopkeeper appeared!”

(If you haven’t got 12 minutes to watch this then skip to about 1.45 for the costume shop action!)

Posted in Museum visits | Comments Off on Dressing up

I went to visit the Museum for the Soldiers of Oxfordshire (SOFO) this morning, completely ignorant about military history and uniforms and not knowing what to expect.  It is currently located in a large room in Woodstock which was probably intended to be an open plan office.  It was full of people researching, having meetings, visitors and staff, all surrounded by lots of military objects, in cases, on tables, on shelves, hanging up.  There is stuff everywhere!  And they have offsite storage!  Staff are gearing up to a big move to a purpose built museum at the end of the garden of The Oxfordshire Museum, just down the road.  The plans pinned up on their walls look very exciting.

So, I wanted to find out what they had in terms of headwear and footwear and I can tell you that it is all about the headwear.  They must have at least 100 hats, helmets and caps judging by a brief look at their database.  What I found the most visually interesting were the wonderful spike helmets, busbys with huge plumes and quirky shakos.  Stanley my guide was very knowledgeable about how they were all influenced by the styles of other countries.  Spiked helmets were of course a German idea, the busby was inspired by the Hungarians and shakos, particularly the high ones, were stolen from the French.  He backed this up with his expert knowledge of when these countries were seen as powerful and it was at this time that the English stole their fashions.  Again this comes back to the idea of transformation that I touched on in my last post.  Did the soldiers of the time use these new hats as a way of inspiring them to be more successful in their battles?   Just like a Native American puts feathers in his headdress to become as wise and powerful as the eagle, it is a little bit of magic!

The SOFO website has most of their objects on so please search here if you want to see examples of the headwear I’ve mentioned.

Posted in Museum visits | Comments Off on Military fashions

This project is busting at the seams with ideas and everyone I talk to has something new and exciting to add.  It’s fantastic that there is so much support and enthusiasm.  But this wild beast needs taming, or we risk spending the next 9 months discussing all of our fabulous ideas.  So, Jess and I have started to tackle “The Plan”, through which we hope to pin down what we are able to achieve, how much it will cost, who’s going to do it and when it needs to be done by.  The lists of objectives and tasks are growing rapidly and it is going to be quite some Gantt chart!

I have also spent much of my time with my nose stuck in a book. My favourite topic at the moment is related to magic.  I’m exploring the way that a top hat makes a man in a suit become a gentleman and the bride’s veil changes a girl into a woman.  Headwear transforms a person and very publically declares the wearer’s new status, often with rigidly set rules particularly in military, legal, religious and educational structures.  Footwear makes a different kind of change on a person, more personal and intimate.  In fairy tales and stories footwear often reveals the true nature of a person, and sometimes this results in a gruesome demise.  I’m thinking here, of course, of Hans Christian Andersen’s The Red Shoes.

I’m also preoccupied with trying to understand why we want new things.  Shopping for shoes fulfils a deep desire, admittedly for some more than others!  But why?  What drives us to want new things to adorn ourselves?  Why do beautiful shoes bewitch us?  I came across a wonderful idea in the Journal of Material Culture that could go some way to explain it.  “Parallels can be drawn between magic and enchantment of advertising campaigns… and the belief in the magic of objects such as amulets and charms…” (Jude Hill The Story of the Amulet, 2007).  I will definitely be discussing this with staff at the PRM over coffee next week.  I’m sure we can find some shoe related, magic objects.

Posted in Uncategorized | Comments Off on Objectives and Magic