A surprise at Thame

A surprise awaited Sam and I at Thame Museum last week.  We had received a list of about 25 relevant objects some time ago.  There were a couple of things that had caught our eye, particularly an Elizabethan shoe, a bowler hat made by a hatter in Thame and a pair of 30s gold shoes.   You can guess which Sam and I were most excited about!  The rest of the items seemed fairly ordinary and described as “brown women’s shoes”,  “black lace up boots” or “tan leather court shoes” so we weren’t too fussed about seeing these.

When we arrived we were warmly welcomed and shown the objects.  Unfortunately, the bowler hat and Elizabethan shoe are on display and unlikely to be lent to us.  The gold shoes were stunning, if a bit crackled with the passing of time, but they were worn by a bride in a village just outside Oxfordshire, so we are unable to justify using them for this project.  Very frustrating as there was photo of the bride too!!  Sam and I asked if we could have a glance at the other objects, mostly shoes that had been taken to the shoe repair section of a department store called Copes in Thame and never collected.  We were expecting a lot of boring, worn out shoes but to our joy there were some wonderful 1920s and 30s women’s shoes and a mixture of men and women’s Victorian and Edwardian boots and shoes.

Some of the early C20th shoes had beautiful details and fit perfectly with the collection at the Museum Resource Centre (MRC), where most of the objects will come from for this exhibition.  I want to have a section in the exhibition which mimics an early C20th shop front, showing these beautiful shoes off with shiny signs that say cheesy things like Comfort and Style, what every woman wants.

Some of the shoes at MRC (click to scroll through) 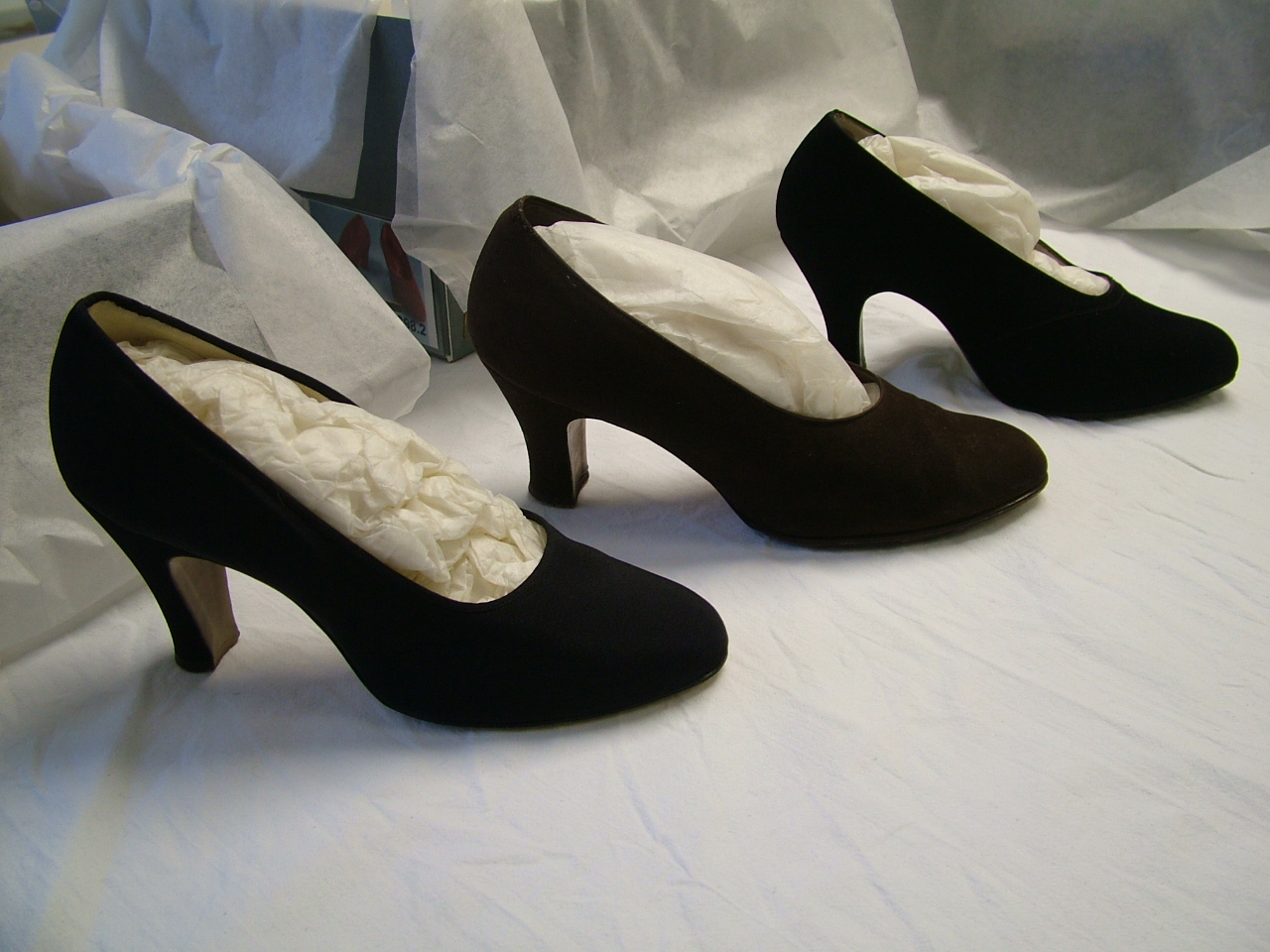 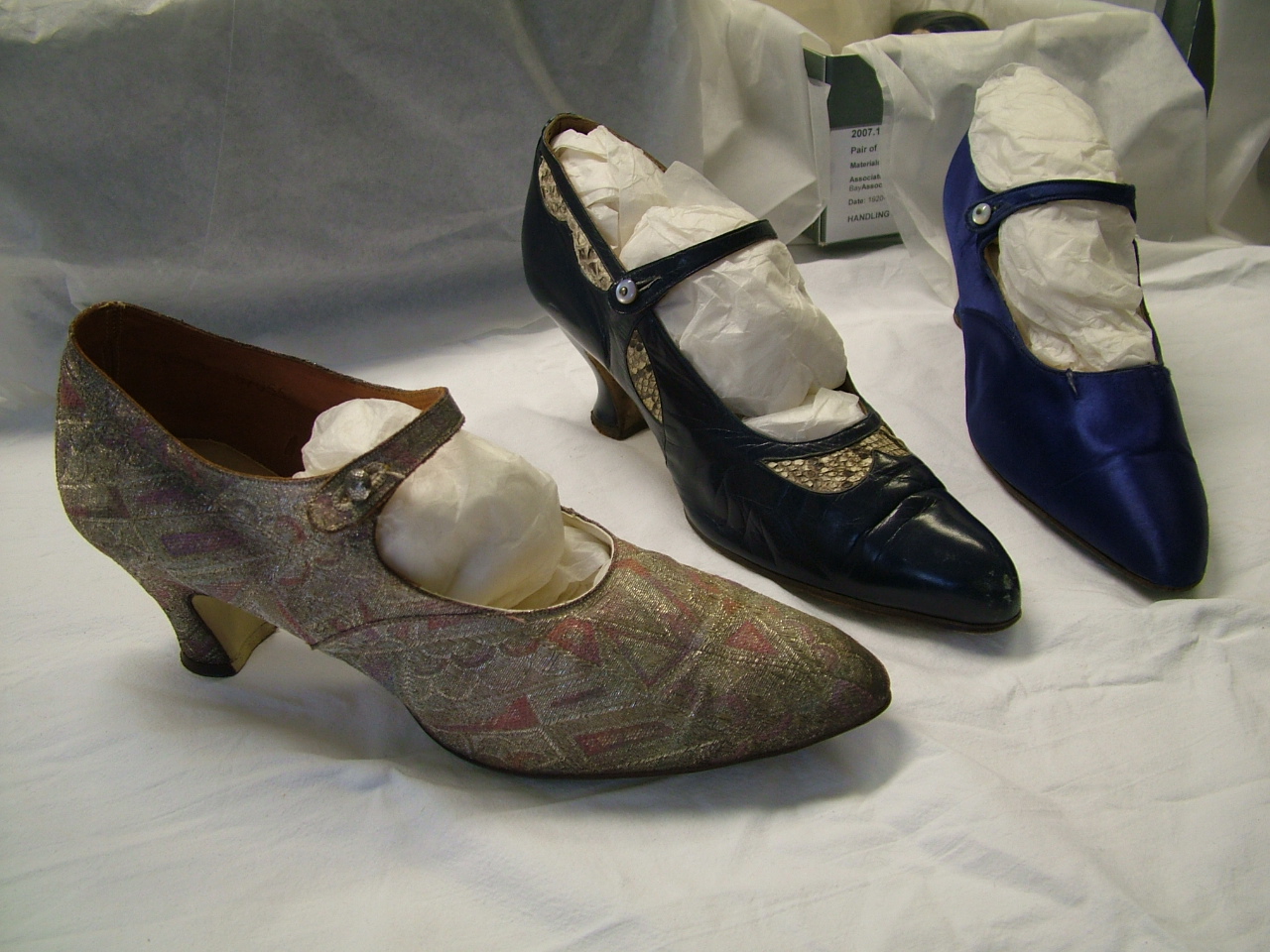 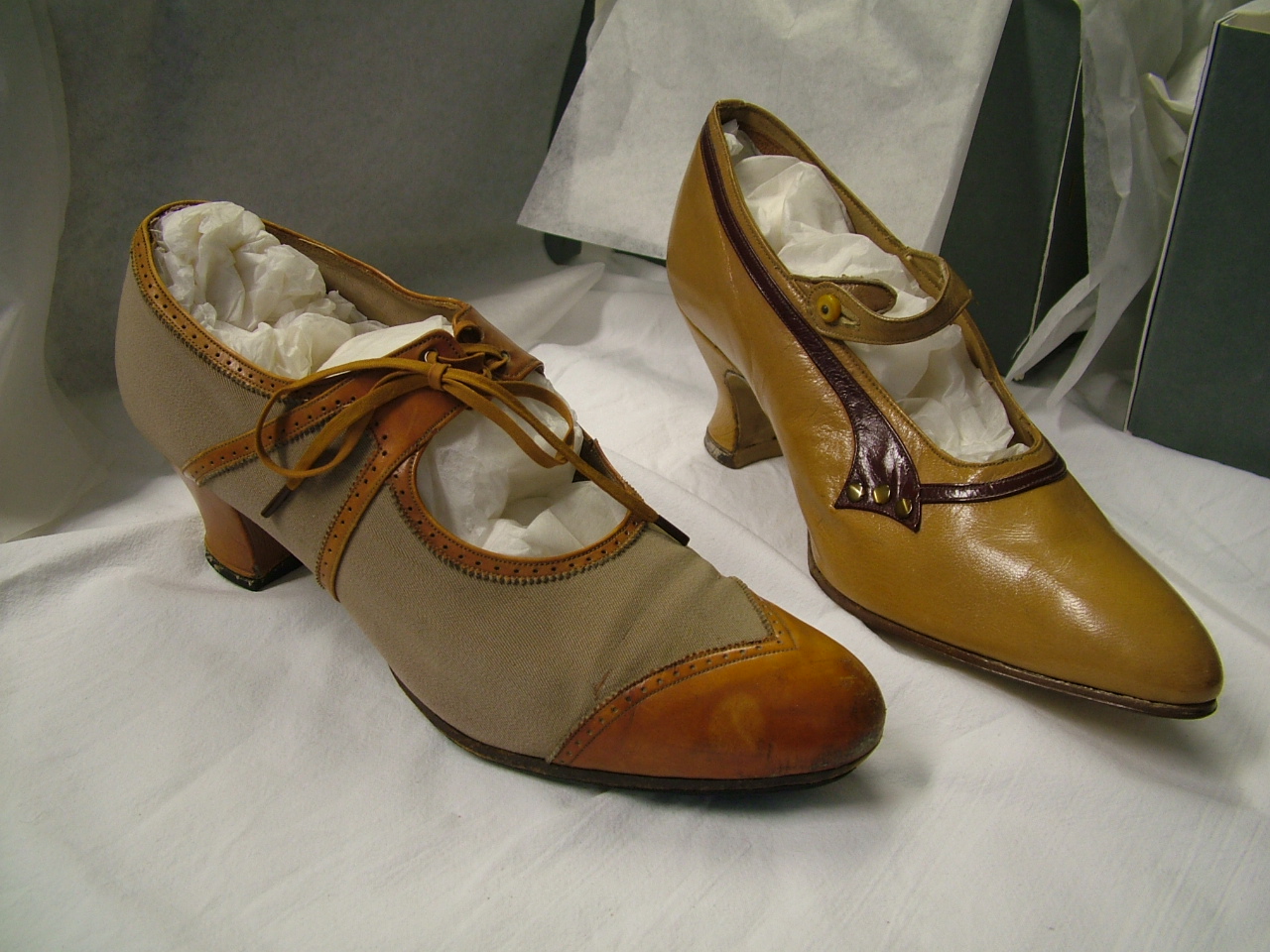 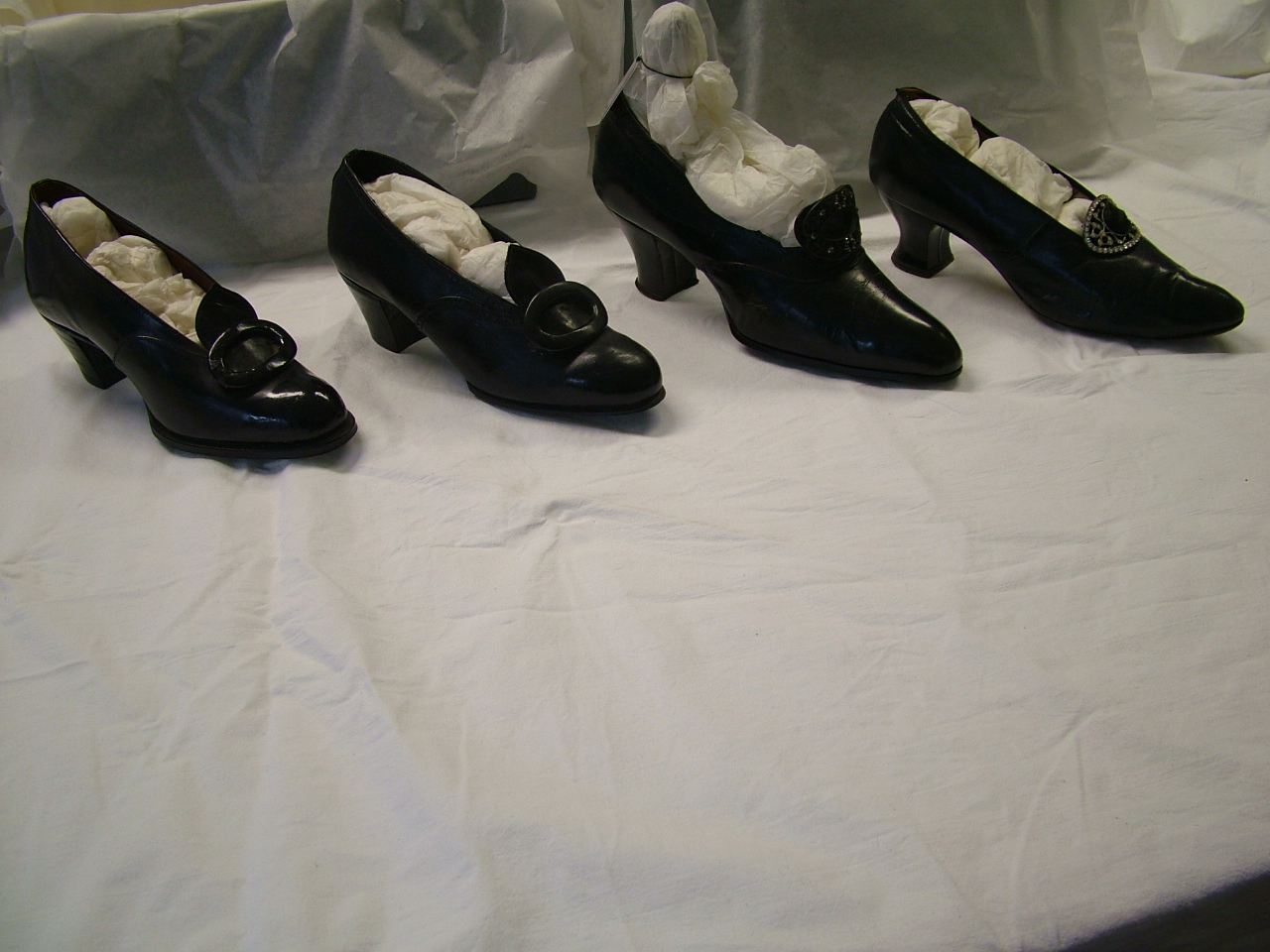 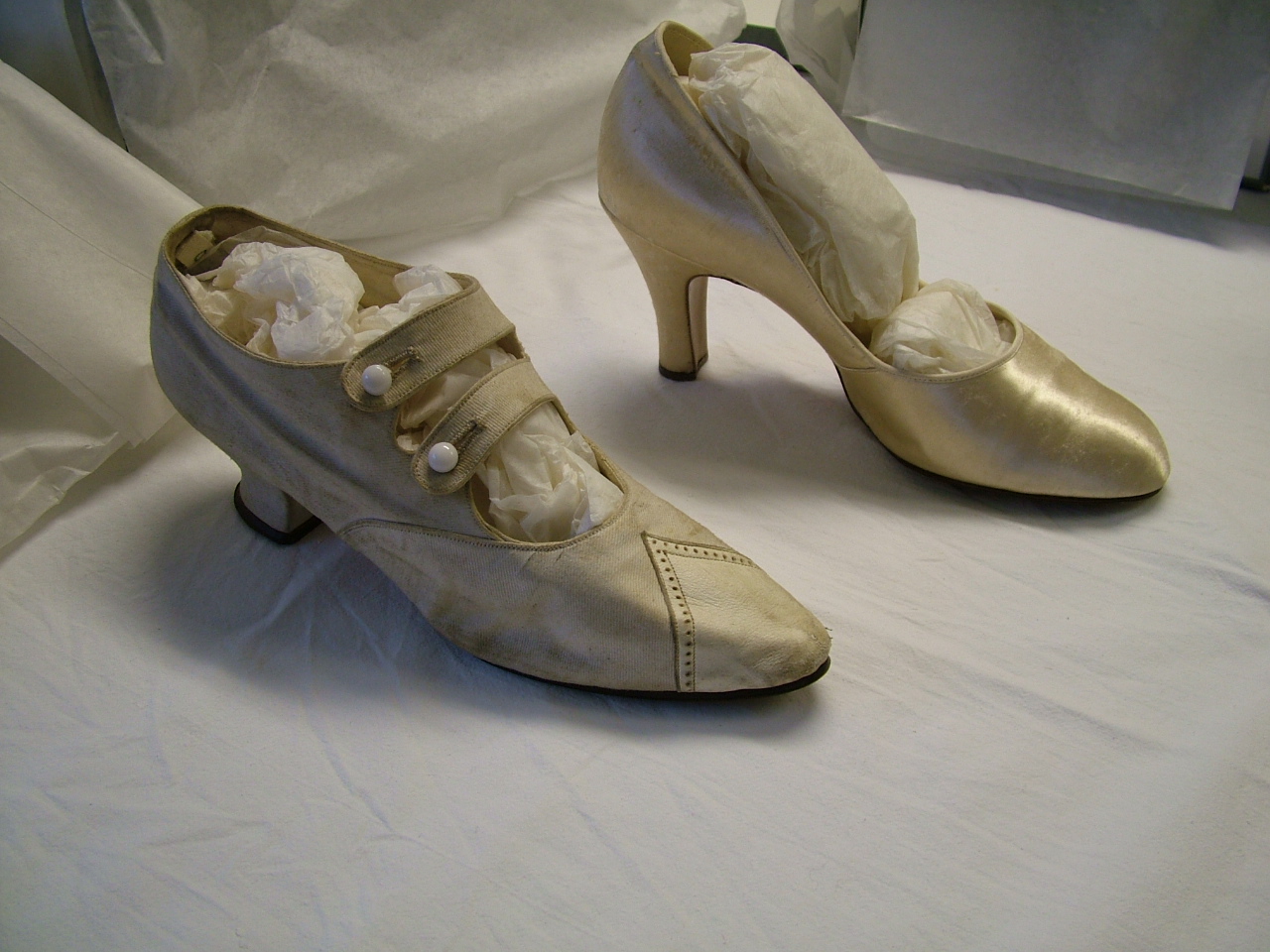 Shopping and advertising have a huge part to play in how we feel about the garments we wear.  Sometimes it’s really hard to put your finger on what it is exactly that makes you want/desire that pair of shoes or that hat or any other garment for that matter.  This is what I’m most interested in and somehow I want this to come across in this section of the exhibition.   I was speaking to a friend recently about his hat.  I asked him why he wore it and he couldn’t articulate the reason, it just made him feel better.   Better about himself?  Better than other people?  I didn’t push the questioning that far!  Although we can’t say this in words, we all know this feeling.  We all have some item of clothing that whenever we wear it we feel, well, just better.

I have worked in the Department of Eastern Art at the Ashmolean for over 5 years and I am very excited about being given the opportunity to work with museums across the county on this project. As Collections Access Officer I will research headwear and footwear in museums and collections in the whole of Oxfordshire, curate an exhibition at The Oxfordshire Museum and work with Education teams and community groups to create an exhibition at the Museum of Oxford.
View all posts by Aimée Payton →
This entry was posted in Museum visits. Bookmark the permalink.